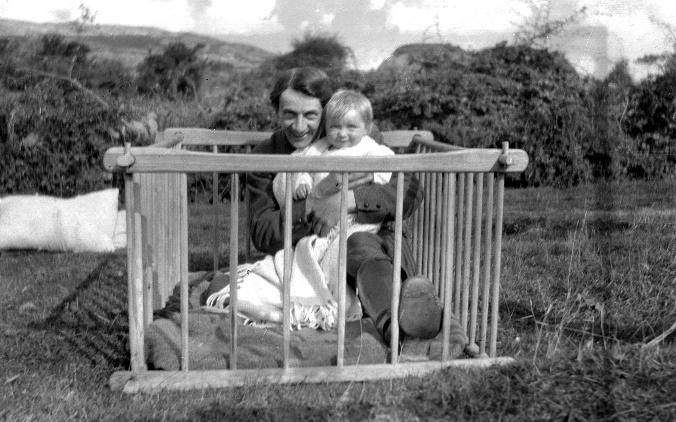 With his daughter Máire, image surmised to be in Ballingeary
(Photo reproduced with kind permission of
Professor Cathal MacSwiney Brugha)

Traolach Mac Suibhne/Terence MacSwiney (1879-1920). Born in Cork City, Mac Suibhne was an Irish playwright, author and politician. In the years prior to the War of Independence he joined The Gaelic League, The Fenian Body, the Cork Dramatic Society and The Celtic Literary Society.

Mac Suibhne had strong family connections in Ballingeary where he spent weekends learning Irish as a first language. Tomás MacCurtáin, Mac Suibhne and Sean O’Hegarty were together in Ballingeary (at Tuirín Dubh) on the day the Easter Rising started in 1916.

Mac Suibhne was elected Sinn Féin Lord Mayor of Cork during the Irish War of Independence in 1920, immediately after Tomás Mac Curtáin’s murder. That year, he was arrested by the British Government on charges of sedition and imprisoned in Brixton Prison. His death there in October 1920 after 74 days on hunger strike brought him and the Irish Republican campaign to international attention.