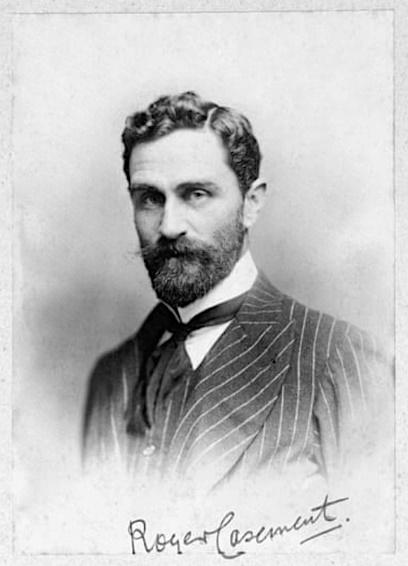 Image 1916
National Library of Ireland
on the commons

Roger Casement (Sir) (1864-1916). Born in Sandycove near Dublin, one of four children, Casement was brought up to be Church of Ireland. As a young adult, he spent many years in Africa and South America working for the British Foreign Office, though this was interrupted for a short period from 1904 when he spent time in Ireland and the UK.

From this period on, he became passionately committed to Irish causes. He is known to have given an annual subscription to Coláiste na Mumhan, Ballingeary from the year it opened until his death.

In 1913, he retired from the Foreign Office and dedicated himself to the cause of Irish nationalism, joining the Volunteers and travelling around Ireland. He was involved in the Howth gun-running and spent time in Germany attempting to gain support for the Irish cause.

He returned to Ireland in a German submarine, due to rendezvous with SS Aud which was carrying arms for an Irish rebellion. It is said that he felt any rebellion would be a failure and that he was keen to prevent it at that time. He was arrested on Banna Strand, Kerry after his dinghy capsized as he tried to reach the shore. Casement was tried for treason as a result and hanged on 3rd August 1916.