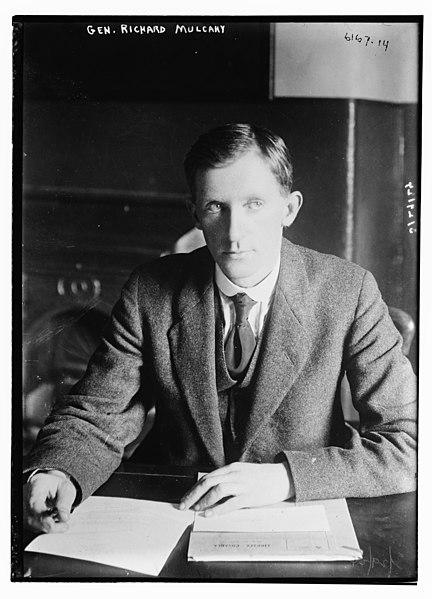 Risteárd Ó Maolcatha/Richard Mulcahy (1886-1971). Born in Waterford, Mulcahy was one of eight children. As a young man he worked in the post office in Bantry and spent time learning Irish in Ballingeary, having been inspired to nationalism by Arthur Griffith’s United Irishmen. When in the village, he would stay at the home of Siobhán ‘An tSagairt’ Uí Chéilleachair, a local storyteller and Irish-speaker, and he referred to her home as his university. In later years he would make a point of visiting Ballingeary when in the area.

He was a member of the Irish Republican Brotherhood (IRB), the Keating Branch of the Gaelic League and later the Volunteers.

He was IRA Chief of Staff and a member of the first Dáil. He was pro-Treaty in the Civil War, siding with Michael Collins. He went on to hold numerous political positions in the new Free State from 1923.