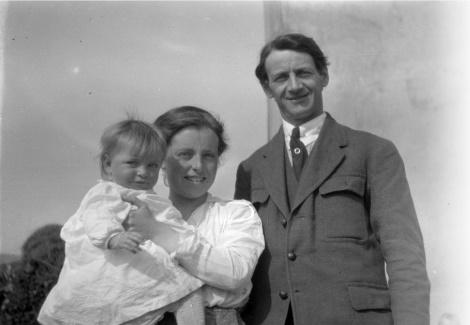 The MacSwiney family
Image surmised to be in Tuirín Dubh, Ballingeary
(Reproduced with kind permission of
Professor Cathal MacSwiney Brugha)

Muriel Bean Mhic Shuibhne (née Murphy)/Muriel MacSwiney (1892-1982). Born into the Murphys, a wealthy Cork brewing family, Muriel grew to have strong nationalist and communist ideals. She rejected a life of privilege due to these convictions. She met Traolach Mac Suibhne/Terence MacSwiney in 1915 and the two were married in 1917 in Herefordshire, UK where Traolach was imprisoned at the time due to alleged involvement in the Easter Rising. Muriel’s family was opposed to the marriage.

The couple had one child, Máire MacSwiney, in 1918. When Traolach died on hunger strike in Brixton prison, Muriel soon departed for America with Traolach’s sister, Máire, looking for support for an Irish republic. On this trip, she became the first woman to be granted the Freedom of the City of New York.

On her return from America in 1921, her daughter Máire recalls that she and her mother lived with a family in a farmhouse in Ballingeary for a time and only Irish was spoken.

Muriel lived to be an old woman having continued to be involved in left-wing politics throughout her life.