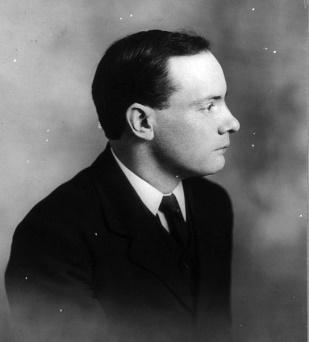 Pádraig Mac Piarais/Padraig Pearse (1879-1916). Born in Dublin to James and Margaret Pearse, he was the second of four children. Mac Piarais was convinced from a young age of the centrality of the Irish language to a sense of national identity.

In 1902, at the age of just 22, Mac Piarais took a cycling tour through West Cork and his description of the journey appears in An Claidheamh Soluis, the voice-piece of the Gaelic League. In it, he talks of Gougane Barra as ‘probably the most Irish-speaking district in Cork’.

A year later, Mac Piarais became editor of An Claidheamh Soluis and, on the opening Coláiste Múinteoireachta na Mumhan, Ballingeary in 1904, he included a piece in the magazine wishing the College well in its endeavours:

“We’d love for crowds of people to come and try this school and we are positive that it will be very popular. But that isn’t the reason the school was founded. It is a school for teachers. Certainly it was high time we had a school like that… We currently have teachers of Irish in a lot of places; however, they wouldn’t do any good because they have no suitable way to teach. First we have to teach the teachers how to teach. Then we’ll do twice the work with half the effort…”

Mac Piarais opened his own bilingual school in 1908 – St Enda’s in Cullenswood House. His interest in the language was not only educational, however. Mac Piarais was a nationalist who had a growing conviction of the need to fight for independence from Britain. He was an active member of the Gaelic League, Irish Republican Brotherhood and Irish Volunteers. He is perhaps best known as one of the leaders of the Easter Rising 1916, a signatory of the proclamation of the republic and the man chosen to read out the proclamation on Easter Monday 1916. He was executed for his part in the Rising.