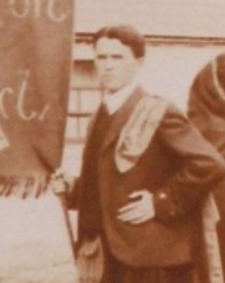 Claude Chavasse (1886-1971). Born in Oxford, UK, Chavasse was interested in Irish culture from an early age. He was awarded a BA from Oxford University in 1909.

He taught Irish in Scoil Acla, Achill but also spent time in Ballingeary. When in Ballingeary early in 1916, was arrested as a ‘German Spy’ under the Defence of the Realm Act (DORA). He refused to speak English to the policeman. In his defence it was stated that ‘Irish was an asset in the vicinity of an Irish College’. He was fined £5 as a consequence at the court in Macroom. He refused to pay and was jailed for a two-day sentence.

In 1925, Chavasse was the secretary of the Knocknacarra branch of the Gaelic League/Conradh na Gaeilge in Galway.

He commonly wore a saffron kilt and cloak.